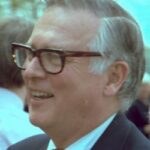 Memorial Service for William Watson Stewart, Princeton Class of 1945, long-time president of The Augmented Eight and co-founder of Spring Sing.

Nassoon alumni under the direction of Rich McGlynn, class of 1960, sing “Old Nassau” in honor of “Wat” Stewart, who also founded the Nassoon Alumni Association. He is also credited with designing the Nassoon tie, given to each senior upon graduation.

William “Wat” Stewart, a retired manager at Acacia Mutual Life Insurance who was passionate about promoting a cappella singing, died Jan. 22 [2011] at his home in Kensington of congestive heart failure. He was 88.

Mr. Stewart was a human resources training manager at Acacia for about 20 years until retiring in 1990. Earlier, he did managerial work in Detroit and New York for Home Life Insurance Co.

In his free time, he enjoyed singing as a second tenor in the Augmented Eight, a men’s a cappella group in Washington. In 1957, he founded the Spring Sing, an annual gathering of a cappella groups from around the country that continues today under the auspices of the American A Cappella Alliance.

Mr. Stewart was instrumental in gathering a collection of a cappella sheet music and recordings to donate to the Library of Congress.

William Watson Stewart was born in Belleville, N.J. He served in the Army in Italy during World War II and graduated from Princeton University.

He volunteered with the Kensington Historical Society, helping to found and direct an outdoor summer concert series and working to preserve historic homes from development.

He was a member of Chevy Chase Presbyterian Church.