Click Here for Link to Sing Out for Shelter 2014 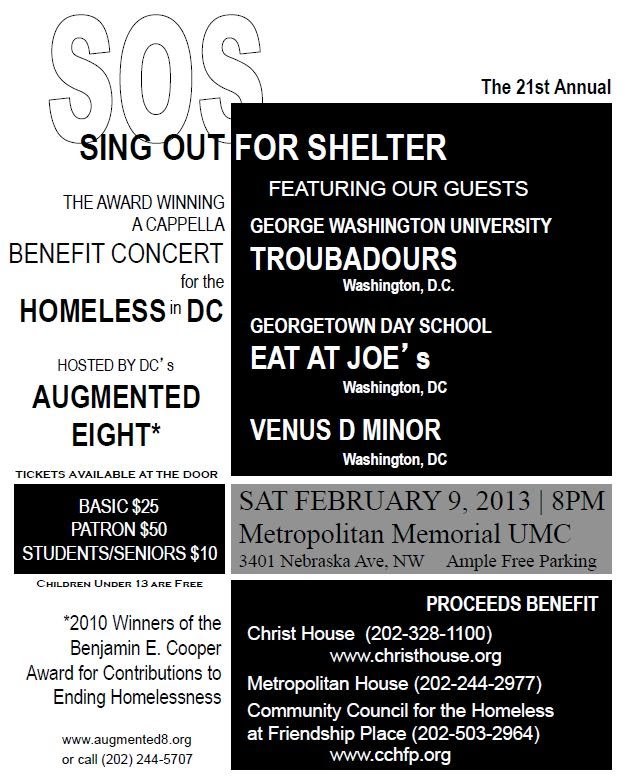 The 21st Annual Sing Out for Shelter (SOS) concert to benefit organizations that serve homeless men and women will be held on Saturday, February 9, 2013, at 8:00 PM at the Metropolitan Memorial United Methodist Church (MMUMC) at 3401 Nebraska Avenue in Washington DC. The concert is organized by the Augmented Eight, a non-profit, men’s a cappella singing group which has performed for Washington audiences for over 50 years.

This year’s concert of a cappella vocal music will once again benefit three local organizations that serve the more than 30,000 individuals who experience homelessness each year in the Greater Washington DC Region – the Community Council for the Homeless at Friendship Place (CCHFP), Christ House, and MMUMC’s own Metropolitan House. These concerts have raised approximately $180,000 over the past twenty years.  In October, 2010, CCHFP honored the Augmented Eight with the 13th annual Benjamin E. Cooper Award recognizing outstanding contributions by members of the Washington DC community to the cause of ending homelessness.

The Metropolitan Memorial United Methodist Church is located at 3401 Nebraska Avenue, NW, Washington, DC, 20016, on the corner of New Mexico Ave and Nebraska Ave, across Nebraska Ave from the American University.  Tickets are $50 for preferred seating, $25 for general admission, and $10 for seniors and students.  Children under 13 are free.  Tickets can be purchased at the door or reserved by contacting John Symington at symington@starpower.net, or musicdirector@augmented8.org.

The Augmented Eight is an all male a cappella group that has entertained Washington audiences for over 50 years with a blend of old standards and modern pop, with a bit of jazz, gospel, and doo wop arrangements.

The GW Troubadours is the oldest a cappella group at George Washington University, with roots reaching back to the the 1950s. The group arranges and performs music from a variety of genres, including pop, classic rock, jazz, international music, spirituals and classical a cappella pieces. The “Troubs” perform frequently at events large and small in the Washington DC area, and at other schools around the country.  In 2011 they performed at the Republican National Security Debate at Constitution Hall.

Venus d Minor is the galaxy’s favorite women’s a cappella octet! Founded originally in the 1980′s, Venus sings arrangements of jazz, swing, pop and rock and roll, often with a humorous slant. Audiences at the Kennedy Center, The Birchmere, Strathmore Center for the Performing Arts, Lisner Auditorium, George Mason University, Glen Echo Park, Jammin’ Java—and in many small overcrowded living rooms throughout the area—have all been wowed by Venus.

Eat at Joe’s is one of the original a cappella groups at Georgetown Day School. Established in the mid-80s, Eat at Joe’s music focus is oldies, classic pop, and a bright, energetic beat! The group has recently performed at private parties, malls, and community events in the DC area.

Christ  House: A full-care health recovery facility for the sick and  homeless in the Washington, DC area, Christ House serves as a place of refuge  and healing. Since opening in 1985, Christ House has served over 4,800  homeless men and women. Suffering from an array of illnesses and  injuries including diabetes, cancer, and AIDS, patients at Christ House  receive 24-hour health care as well as a full range of social services. The  goal is for patients to leave Christ House with a new sense of hope and  dignity and live independently in the community. For further  information: 202-328-1100; www.christhouse.org.

Community Council for the Homeless at Friendship Place is a district-wide organization offering the most effective model for addressing adult homelessness.  Our innovative, customized programs empower participants to rebuild their lives, find homes, get jobs and reconnect with friends, family and the community, permanently.  Friendship Place provides unique, person-centered services, including outreach, hospitality, health care, case management, housing, job placement, education, advocacy, and Veterans’ services.  With our exceptional leadership, staff, volunteers and partners, we work to build a community and nation where every person has a place to call home. For further information:  202-503-2964; www.cchfp.org.

Metropolitan House: A homeless  shelter sponsored by, and housed in, the Metropolitan Memorial United Methodist  Church, in northwest Washington. Since Metropolitan’s merger in 2008 with St. Luke’s UMC, Metropolitan House has worked in concert with the St. Luke’s Shelter for Men.  These two congregational shelters were pioneers in the small-shelter movement when they opened 20 years ago.  Since then, they have provided stable, secure living environments that have empowered hundreds of residents to move beyond homelessness towards self-sufficiency and permanent housing.  For more information, call 202-363-4900 or visit www.nationalchurch.org.