The 21st Annual Sing Out for Shelter (SOS) concert to benefit organizations that serve homeless men and women was held on Saturday, February 9, 2013, at 8:00 PM at the Metropolitan Memorial United Methodist Church (MMUMC) at 3401 Nebraska Avenue in Washington DC. The concert was organized by the Augmented Eight, a non-profit, men’s a cappella singing group which has performed for Washington audiences for over 50 years.

This year’s concert of a cappella vocal music benefitted three local organizations that serve the more than 30,000 individuals who experience homelessness each year in the Greater Washington DC Region – the Community Council for the Homeless at Friendship Place (CCHFP), Christ House, and MMUMC’s own Metropolitan House. These concerts have raised approximately $180,000 over the past twenty years.

In October, 2010, CCHFP honored the Augmented Eight with the 13th annual Benjamin E. Cooper Award recognizing outstanding contributions by members of the Washington DC community to the cause of ending homelessness.

Watch and listen to Mike Wyatt and The Augmented Eight perform “Again.”

Sing Out for Shelter 2017 Concert to Benefit the Fight Against[...] 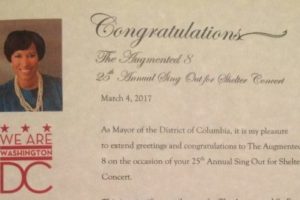 The Augmented 8 25th Annual Sing Out for Shelter Concert[...]