Sing Out for Shelter turns 25, Whiffenpoofs cast their spell

WASHINGTON, March 6 — The fight against homelessness in Greater Washington was the winner of Saturday’s highly successful “Sing Out for Shelter” concert as cumulative proceeds for the last 25 years topped $300,000. All funds are distributed to Christ House, Friendship Place, and Metropolitan House, agencies working tirelessly in the District on behalf of our homeless population. The packed house at Metropolitan United Methodist Church was treated to a memorable evening of a cappella music, emceed by CNN’s Jim Sciutto, featuring hosts The Augmented 8, the Vassar Devils, the Knightlights of the Washington Waldorf School, and—a dramatic last minute substitution—the oldest and best-known collegiate a cappella group, the Whiffenpoofs of Yale.

The flu benched concert headliners, the Princeton Tigertones, leaving a potentially large gap in the anniversary program. But by divine providence, the Whiffenpoofs were between a Saturday afternoon concert in Baltimore and a Sunday concert in Alexandria amid a 29-concert,19-day tour. They agreed to give up a restful Saturday night to make it an even 30 and rewarded a grateful audience by filling the Tigertone slot in the program.

It should be noted that The Augmented 8 was formed over 65 years ago—a collaboration of graduates from both Princeton and Yale. Those ties remain strong today. We are grateful to all of our guest groups and faithful listeners for supporting this great a cappella tradition and the organizations doing such important work in our community. For the Tigertones, though, the pressure is clearly on. We will see you next year. 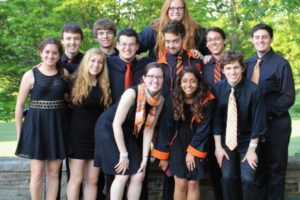 Sing Out for Shelter (2014) Hits Highest Note Yet!

This year's Sing Out for Shelter homeless benefit concert was[...]