In 1992, D.C.-based economist and a cappella singer Bill Cline was driving by Dupont Circle and was stunned to find many mentally disabled people wandering the streets, homeless. The scene reminded Cline of the impoverished Latin American countries where he had once worked.

In that moment 25 years ago, an idea was born.

Cline and his all-male a cappella group, “Augmented Eight,” would put on a “Sing Out for Shelter” concert in D.C. dedicated to helping the city’s homeless population.

In March, the concert—now in its 25th year—raised more money than ever before. A crowd of 550 concert-goers donated a total of $27,000, which Cline will turn over to the three D.C.-based shelters that he has long supported: Friendship Place, Christ House and Metropolitan House.

“The shelters are the professionals who know how to deal with the complex homeless situation,” said Cline. “We let them do their work to best help the homeless people.”

Despite a $14.8 million increase in funding for homeless services this year, the city’s budget still falls far short of meeting the housing needs of thousands of homeless people and their families, according to The D.C. Fiscal Policy Institute.

Officials at the shelters supported by Cline’s annual concerts said the extra money is critical to their operations.

“The donation helps us fulfill our programs,” said Jean Michel Giraud, president of Friendship Place, where programs including housing, job placement, youth training and outreach are provided to the homeless.

The concert has become so popular in recent years that the mayor’s office sent out a proclamation acknowledging “Augmented Eight’s effort to help the most vulnerable residents in D.C.”

Cline said that when the concerts first began, they drew small crowds in various locations scattered around the city

“We were sort of homeless ourselves,” said Cline. “We have performed at the Gaston Hall of Georgetown University and some small churches.”

This year, a system that allows the group to sell tickets online boosted sales. Information about the concert was also available on the Eventbrite website, a popular site for local event browsing.

The group behind the successful concert are 12 members who include lawyers, physicians, State Department employees and an architect. They reside in D.C., Virginia and Maryland, but come together to sing during weekly rehearsals.

John Symington, the current president and first tenor of “Augmented Eight,” is a former member of Yale’s renowned all-male a cappella group, “The Whiffenpoofs,” and was introduced to “Augmented Eight” at a “Whiffenpoofs” concert.

Besides the benefit concert, the group practices for an annual “Spring Sing” concert festival put on by the American A Cappella Alliance, a nonprofit organization promoting a cappella ensemble singing of all styles of popular music.

Symington said his recent favorite songs are “Who You Are” and “Oh Shenandoah.”

“Asking me what’s my favorite song is like asking a 100-year-old what’s his favorite pie,” said Symington. “I enjoy the song I am singing the most.” 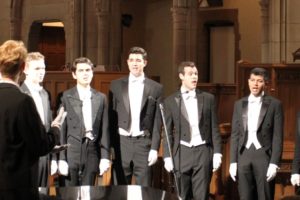 Sing Out for Shelter turns 25, Whiffenpoofs cast their spell

Mar 7, 2017
The flu benched concert headliners, the Princeton Tigertones, leaving a potentially large gap in the anniversary program. But by divine providence, the Whiffenpoofs were between a Saturday afternoon concert in Baltimore and a Sunday concert in Alexandria amid a 29-concert,19-day tour.

Sing Out for Shelter 2017 Concert to Benefit the Fight Against[...]